It was a graceful, joyful, cheerful event but also an obstacle-laden show which took place last Friday at the port of Hamburg – the christening of the 10,500 TEU vessel “Guayaquil Express.” Caprices of the weather god and a blunt axe triggered the two hiccups.

The eighth attempt finally worked
Having finished with her baptismal motto, Frau Kuehne took a small axe to sever a large cord connected to a bottle of sparkling wine attached way above her head on the ship’s rail. However, Mrs Kuehne’s cord-cutting attempt failed eight consecutive times before she finally succeeded with the bottle smashing to pieces when hitting the hull of the ship.
Mrs Kuehne had scarcely accomplished her job when the next mishap followed: it starting raining cats and dogs, flooding and inundating the red carpet that had been rolled out as welcome gesture for the 300 hand-picked guests attending the ceremony, cleaning up the ship’s side within seconds from the remains of the champagne.
Maybe a good augury for the vessel’s fate sent from heaven? At least this was the immediate interpretation of the Hapag-Lloyd officials.

Fourth vessel in a series of five
The “Guayaquil Express” is the Hamburg-based shipping line’s fourth out of five 10,500 TEU containerships ordered in South Korea and built at Hyundai Samho Heavy Industries. It doesn’t add to the overall capacity sailing under the H-L flag since it replaces two older vessels. Its homeport is Hamburg and it will be operated under the German flag. 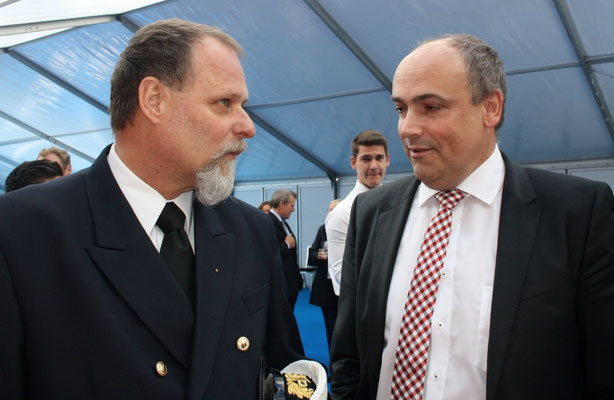 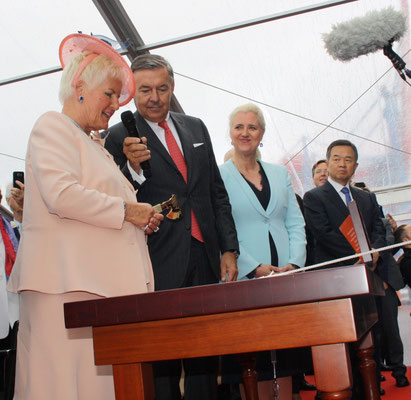 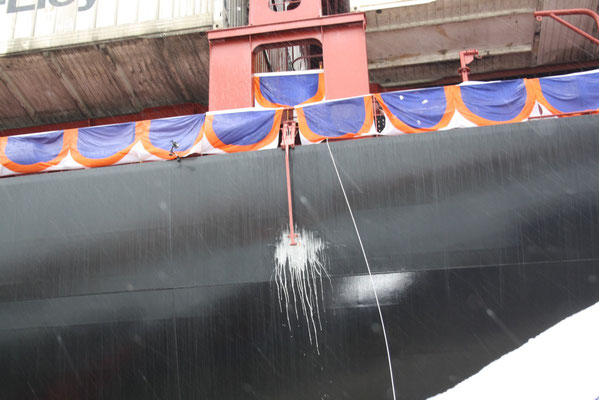 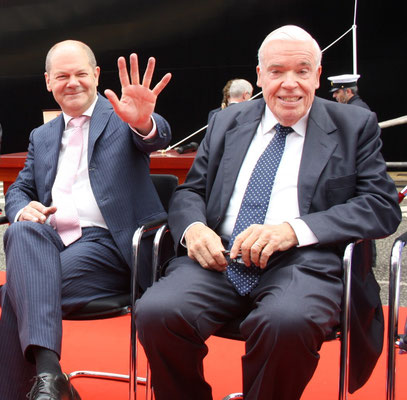 Smart ship
In his speech held prior to the naming ceremony, CEO Rolf Habben Jansen of Hapag-Lloyd AG, stated: “The 'Guayaquil Express' is a 'smart ship', equipped with cutting-edge electronics, offering 2,100 slots for reefer containers.” A highly efficient main engine propels it; an optimized ship hull and a new loading system for higher capacity utilization add to the upgrades. The container ship will be operated between European and Latin American ports, calling Hamburg, Antwerp, Le Havre, Caucedo, Cartagena, Manzanillo / PA, Buenaventura, Callao, Puerto Angamos and Valparaíso. In contrast, Guayaquil is not part of the sailing route.

Fit for the Panama Canal
With a length of 333 meters and a width of 48 meters, the ship is designed for the new locks of the Panama Canal. This way, Hapag-Lloyd underlines its leading role in Latin America ocean traffic. The company claims that following the merger with the container activities of Chilean CSAV 2014, the shipping line belongs to the market leaders in this shipping area.

Elbe River will finally be dredged, Mayor assures
In his contribution, Hamburg’s Mayor Olaf Scholz reminded that H-L stands for 15 percent of the total tonnage shipped through the city’s port and when adding the loads of its alliance partners it comes to 40 percent. He assured that the Elbe River, Hamburg’s maritime lifeline, will be dredged as intended after new habitats for endangered plants living downstream on sites influenced by tidal waters have been identified and will become designated areas, as mandated by Germany’s Federal Administrative Court. The judges in their ruling of last year prescribed establishing compensation areas and new biotopes for species whose habitat is suffering from the requested Elbe dredging.
Once the river is deepened, even the latest generation of large and fully laden container ships can call the port.

Soccer has also been a topic
By addressing Klaus-Michael Kuehne directly, Mayor Scholz outed himself as soccer expert. “Guayaquil, a city of three million, is home to two major league Ecuadorian clubs. One of them finished third, the other in fourth place during the previous season. They could well serve as role models for Hamburg,” Scholz said with a twinkle in his eyes.
A message Mr Kuehne took with sporty humour. His favourite club, Hamburger Sport Verein (HSV), in which he has pumped millions of euros into, ended up in disappointing 14th position last season in the German Bundesliga. Much to the regret of the Hamburg-born billionaire, who not only is financially heavily committed in Hapag-Lloyd but owns 17 percent in his beloved Hamburger SV.