The German Airport Association ADV has turned 70. It was a glittering event last Thursday evening attended by 2,200 guests. With the former central building of historic Berlin Tempelhof Airport, the organizers couldn’t have picked a better place for the big ADV feast. This was reflected by the overwhelming resonance, with the ‘who is who’ of the German aviation industry showing up, paying their tributes to the much acknowledged association.

No further operational restrictions, says Minister
Words, which were music to the ears of the attendees, particularly those of the airport bosses of Frankfurt, Munich, Cologne or Hamburg who gathered there. On behalf of the Merkel government, Dobrindt assured that there will be no further operational restriction at any of the larger airports. “Our economy needs night flights at selected sites; operational constraints suffocate airports, cost jobs, hinder exports and reduce prosperity,” he exclaimed. He went even further announcing that capacity extensions are a must, indirectly addressing Rhine-Main and their plans to build a third passenger terminal as well as Munich where a third runway is badly needed in view of the constant growth of its passenger and cargo traffic. 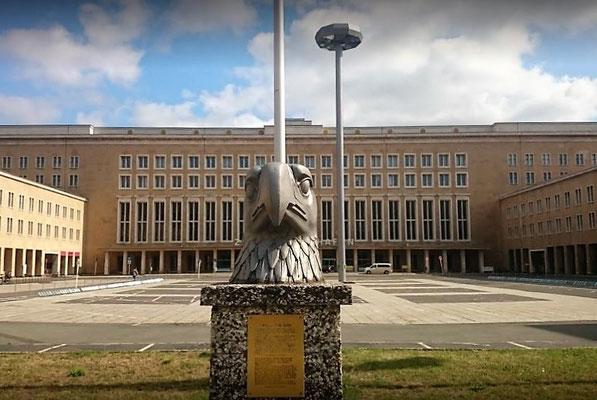 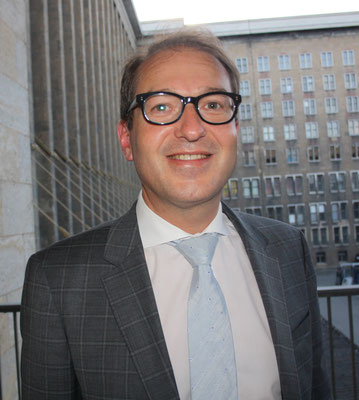 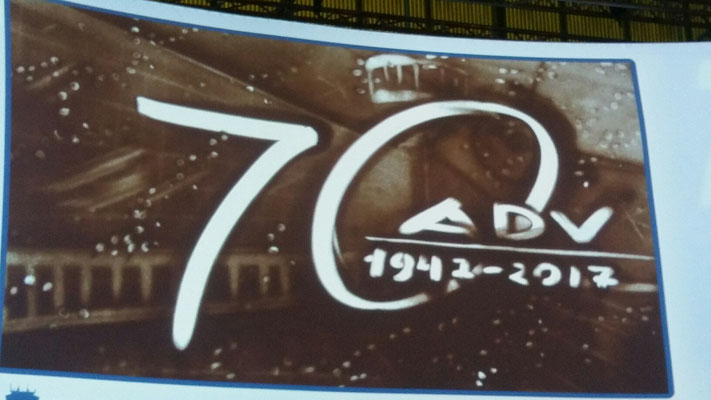 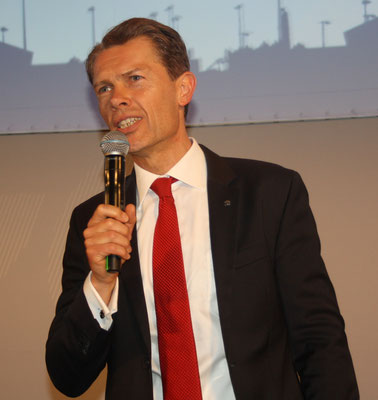 Budapest joins the club
ADV Managing Director Ralph Beisel, who heads the association for the past ten years, unveiled impressive figures. “In total, roughly 250 airlines operating at any of our member airports offer flights to 600 destinations,” he proudly stated, while welcoming Budapest next to Vienna and Zurich as the latest foreign member to his club.
One of the evening’s highlights was the entertaining show mutually performed by outgoing ADV President Michael Kerkloh, CEO of Munich Airport and Cologne-Bonn’s helmsman Michael Garvens, who takes over ADV responsibility from now on. In the scene, Kerkloh acted as apron controller, guiding Michael Garvens, who rolled up stage on a Segway scooter, to his new position. Upon arrival, Kerkloh handed over the chain of office to his successor.

Changed role of airports
Right after, newly enthroned Michael Garvens summarized the past and present role of the German airports in one sentence: “After WW II, airports were pure infrastructural facilities. Today they are providers of multiple services.” Addressing Mr Dobrindt and politics in general he advocated concepts for infrastructural enlargements according to demand. “By 2030, we expect to handle 300 million passengers at our airports,” he said – a plus of almost 80 million compared to today. That’s why Munich needs a third runway, Frankfurt an additional passenger terminal and Dusseldorf some extension of their facilities. In addition, Garvens emphasized the need of 24/7 traffic, offering the logistics sector, freight airlines and integrators appropriate business conditions.

Airports raise many expectations
Finally, he recalled the importance of airports and aviation in Germany: 180,000 people are working at the country’s airports, with 81,000 in Frankfurt alone. “Airports are places of longing, hope and freedom: They are also engines of economic development and wealth. And they will remain being gateways to the world in the coming 70 years as they have been in the past,” Michael concluded.

On the sidelines of the ADV party, we have collected voices and impressions from some of the invitees. Here is what they said:

Volker Greiner, Vice President North & Central Europe, Emirates
It’s really remarkable what the ADV people have put up and successfully orchestrated. When looking around and seeing the many people flocking into the Tempelhof hall demonstrates how important the aviation industry is. Following the official program we had some great conversations with industry representatives and managers from Frankfurt, Munich, Dusseldorf and Hamburg, which we serve since long. In total, we currently operate 12 daily passenger flights to these airports and 10 freighter services per week, with two of them linking Frankfurt and Mexico.

Gunnar Heinemann, co-owner of Hamburg-based trading company Gebr. Heinemann
It is debatable whether it is wise to celebrate an association’s 70th birthday. Maybe 75 years or 77 would have been a better pick. Apart from this rather technical issue I must say that it is a joyful evening, I wouldn’t have liked missing. During the last couple of hours, I met old acquaintance and business partners and established some new contacts as well.
Especially speaking with airport representatives is very important to me since we run Duty Free and Travel Value shops at ten German Airports.

Michael Hoppe, MD Board of Airlines Representatives in Germany (BARIG)
The location selected by ADV is extremely stylish. Tempelhof represents aviation you can sense and touch. As BARIG we congratulate the association to its anniversary and look forward to cooperate with their member airports also in future to bringing aviation and the entire country further forward. 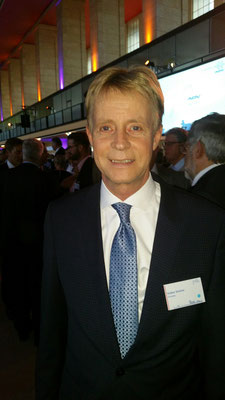 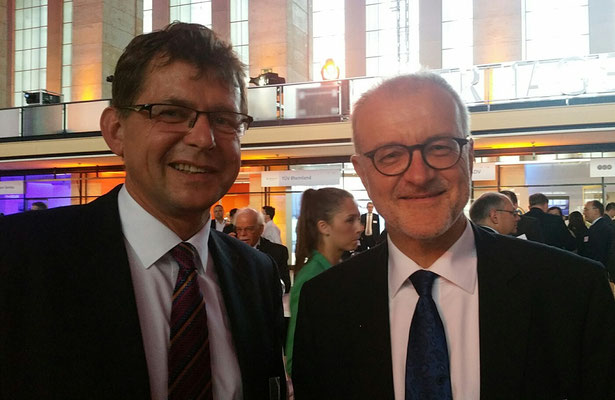 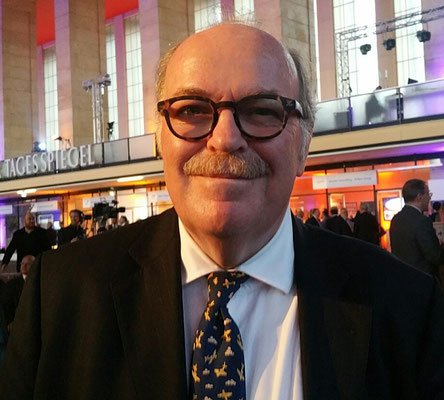 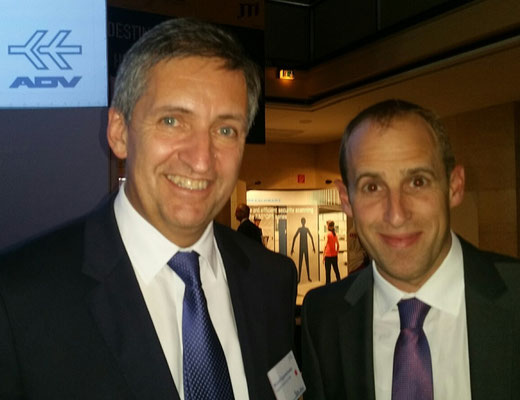 Winfried Hartmann, Head of Sales and Customer Relations, Fraport
The entire airport family celebrates itself tonight and it has every reason to do so. We look back on 70 years of successful cooperation, what unfortunately too little people know and acknowledge. Promoting our industry’s own merits, its outstanding significance for the economy is something we need to work on in the future. But we certainly must put our own house in order by implementing projects much faster. According to Stephen Hawking, the human species will die out in the next hundred years. When hearing this prediction, the BER officials have become somewhat hectic!

Stephan Widrig, CEO Zurich Airport
One should celebrate the parties as they come. The Tempelhof location in Berlin chosen by the ADV, which our airport is a member of, is a perfect place on this occasion. Managers of all German-speaking airports have come to jointly celebrate the anniversary. Answering to your question what some of them could learn from Zurich I must say that efficiency is something where I personally see some room for improvements.

Michael Eggenschwiler, CEO Hamburg Airport Helmut Schmidt
I can only reiterate what my Zurich colleague just stated: The building, with its colorful history, chosen by the ADV team to celebrate this jubilee event is very first cream. I personally think that the decision taken by Berlin’s Senate some years ago to close Tempelhof irrevocably is a great pity. Unfortunately, the government missed the opportunity tonight to abolish the 2011 introduced air traffic tax. It would have been a great chance since the tax was proclaimed in this room.